London Climate Week: is the world ready with its emergency response?

At an international debate during London Climate Action Week, progressive voices shared how they’re showing leadership in tackling the climate emergency – and called on the rest of the world to match their ambition.

The first ever London Climate Action Week could not have come at a more critical time.

The world’s leading climate scientists have issued the gravest of warnings: we now have just over 11 years to cut global emissions in half or face catastrophic environmental collapse.

The UK and other nations have formally declared a state of climate emergency, alongside making pledges to cut net emissions to zero before 2050 and calling for collective commitment to cap temperature increases at 1.5° Celsius.

In terms of global climate politics, the clock is ticking. 2020 is the make-or-break year for the Paris Agreement. Signatories now have only 18 months to make good on the promises they made in 2015.

Leading from the front

As London seeks to position itself as a global leader on climate action, a delegation from the Least Developed Countries (LDCs), plus grassroots community organisations and climate champions, gathered for an international debate to show the world how they are leading action – both in adapting and building resilience to climate threats, and in reducing emissions.

During the debate, these progressive voices demanded their ambition to tackle the climate emergency be matched by urgent, concrete action from nations across the world. The event, titled 'Leading from the front: responding with urgency to the climate emergency' was hosted by IIED, Willis Towers Watson, the Global Resilience Partnership and the Global Commission on Adaptation, in partnership with the Least Developed Countries Group.

LDCs are taking their destiny into their own hands at the frontline where the climate fight is. Lamin Dibba, The Gambia’s minister for environment, climate change and natural resources, described how LDCs, despite their vulnerabilities, are showing the rest of the world what needs to be done.

He said: “The Gambia has pledged to reduce greenhouse gas emissions 45% by 2030. To achieve this ambitious target, we will reduce dependency on fossil fuels for electricity generation by more than half. We are already exploring opportunities with our regional and international partners to shift to using renewable energy sources.”

A video of the first session of the 'Leading from the front' event, which focused on responding with urgency to the climate emergency

In 2009 Bhutan, LDC member and chair of the LDC Group in the UN climate talks, became the first country to commit to being carbon neutral. It stands tall as the only carbon negative country in the world, absorbing three times more C02 than it emits.

Dibba said: “This is leadership of the most vulnerable. And it is this leadership that should inspire others to take bold climate action.”

He stressed the urgent need for big emitters to follow the LDCs’ lead – to stop adding to the stock of greenhouse gasses in the atmosphere and to bend the curve of global emissions.

The LDCs are championing this effort and we look to the international community to rise to our leadership. The UK and others have rightly declared a climate emergency.

So, the question is this: where are the first responders? We must all act. And we must act quickly. It’s time for everyone to step up.

The LDCs find themselves at the sharp end of the impacts of climate change; they are most exposed to climate hazards, despite having done the least to cause these impacts.

Earlier this year, Cyclone Idai tore through Mozambique and Malawi killing more than 600 people and affecting 2.6 million. In March, Nepal was hit by its first ever recorded tornado. Meanwhile, rising sea levels present massive economic, social and environmental challenges to low-lying LDCs such as the Pacific island nation of Tuvalu.

While showing momentous ambition and commitment to tackle the climate challenge head-on, the LDCs cannot protect themselves from climate damage without financial support. And not enough funding is getting to people on the ground where it is needed most. Recent IIED studies found that only 18% of global climate finance is reaching the LDCs and – of that 18% – just 20% is going to address adaptation challenges. And of that, only 10% reaches the local level.

A video of the second session from the 'Leading from the front' event, which focused on financing urgent ambition

Lucy Ssendi, senior climate change advisor to the President’s Office for Regional Administration and Local Government (PO-RALG), Tanzania, spoke about how the gaping climate finance hole is derailing efforts to build the country’s resilience to climate change. She said: “Our government needs around US$500 million a year to deliver its climate strategy. But development partners have only approved $150 million for disbursement in total since the early 2000s. So, you can see the gap.”

Pots of climate finance are available, but speakers said the processes and mechanisms to channel money to communities on the ground are often not fit for purpose.

Sam Cheptoris, Uganda’s minister of water and environment, highlighted the struggle in applying for funds.

He said: “When the international community said they would provide a hundred billion dollars of climate finance, we were excited. But the money has not been forthcoming. And even when this money is available, accessing it is a nightmare. The accreditation process itself is long and cumbersome; financial institutions demand reams of documentation that require huge efforts to compile.”

Addressing #ClimateChange in Uganda requires money but accessing #ClimateFinance is a nightmare! Climate institutions requirements for accreditation are so challenging we sometimes just give up and go through intermediaries like UNDP #MoneyWhereItMatters #LondonClimateActionWeek

The LDCs are leading and driving efforts to develop a vision for a climate-resilient future by 2050 as part of the LIFE-AR initiative. The initiative calls for an overhaul in the way adaptation is done – away from business as usual; away from short-term thinking to longer-term planning; away from the status quo where finance is not getting to the countries and communities who need it most.

The vision is designed to bring sustainable, long-lasting change. This includes tackling the inadequacies of the architecture around climate finance.

Beth Chitekwe Biti, deputy manager of Slum/Shack Dwellers International, referenced the LIFE-AR initiative as the kind of dramatic rethinking needed to deliver real change. She said: “We need an architecture that delivers to people on the ground. People have to adapt – they have to, they have no choice. If there is a flood, they will build a makeshift bridge, if there is a fire, they are going to find a way to address that.

“There is the opportunity for all stakeholders to contribute to changes that are significant – that work at scale and are lasting.”

Looking ahead to September, the hotly anticipated UN Secretary-General’s climate summit will ask nations for ambitious and concrete commitments to bring speed and scale to global climate action.

The Global Commission on Adaptation (GCA) moves communities, cities and countries to proactively prepare for the disruptive effects of climate change with urgency. Emma Boyd is UK representative to the commission and chair of the UK’s Environment Agency. She said the GCA’s resilience and adaptation track will be crucial for keeping adaptation high on the political agenda, and on a par with mitigation efforts. She said this equal footing is vital: “Clearly, the low carbon transition is critical. But wherever you are in the world, what is the point in investing in an energy efficient building or piece of infrastructure if it washes away in a flood or melts in a heatwave?”

According to IIED director Andrew Norton, the September summit marks a major opportunity for the LDCs to take their commitments and asks from their vision – as set out in the LIFE-AR initiative – to world leaders from government, business, finance as well as states, cities, citizens and civil society.

He said: “We need to see the Secretary-General’s climate summit as a starting point not an ending point, where nation states and multilateral institutions have been asked to commit to delivering transformative action with ambitious and concrete actions.

“Business as usual is not working. The September summit is an opportunity for a step change in ambition. LIFE-AR is an example of an initiative being driven by the climate frontrunners, pushing for ambitious action that will enhance the resilience of the most vulnerable countries and the most exposed populations,” said Norton. 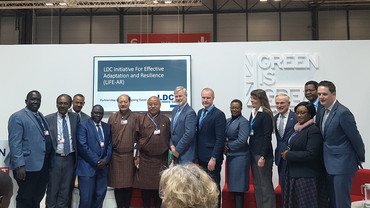 Supporting the LDC Initiative for Effective Adaptation and Resilience (LIFE-AR)