Research with refugees: taking care not to cut a long story short

Protocols for ethical research are essential for upholding key principles. But the practicalities of applying these protocols raised questions and challenges during a research project with refugees in a Nairobi trade hub.

Most research projects must pass through internal institutional ethics reviews before they get under way. These review processes are often based on ethical principles originally developed for biomedical research.

For example, the ‘do no harm’ principle − an obligation that no harm is inflicted on research participants − is believed to have emerged from the Hippocratic oath taken by medical students.

Such protocols uphold principles including respect, beneficence and confidentiality.

But applying ethical principles during certain research activities – in our case research with refugees − can present challenges.

As part of an IIED-led project comparing the experiences of displaced peoples in cities and camps, we conducted semi-structured interviews with urban displaced populations in a neighbourhood of Nairobi.

Challenges encountered while carrying out these interviews encouraged us to reflect on the practical application of ethical principles and protocols in research.

Refugees living and working in the neighbourhood of Eastleigh, east of the city’s central business district, are used to researchers poking around their busy streets and malls.

Over the years, this Nairobi trade hub has been studied as an example of the economic prosperity that refugees can bring to cities.

For some refugees, this research has become a source of growing fatigue.

While interviews may be conducted in line with ethical requirements, the process can be frustrating for refugees. They take part in the research and are asked again and again about issues such as household income, shelter conditions, food security and access to documentation − but do not see any tangible changes in their circumstances.

Research processes are also often repetitive and mechanical: responses are extracted from a series of highly structured questions, leaving little room for the refugees to share their stories in full, to feel heard.

The joy of being heard

An Ethiopian boda boda driver was one of our first interviewees. Tears flowed when he remembered his journey to Eastleigh, giving up his hopes of university study, and the frustration he felt when learning about his classmates’ accomplishments; those who weren’t forced to flee.

He described his achievements as an entrepreneur, challenges he had navigated, connections he had made, and explained the valuable service he brought to host communities.

When the interview ended, he said this was the first time he’d been asked about his story; he felt happy to be heard and acknowledged.

Later we talked to a successful Somali sportswear trader. He was quick to point out he was busy, with little time for interviews.  But we showed our genuine interest in hearing his full story and – clearly proud of his achievements and wanting to share these with us − he talked to us for more than an hour.

Interviews should be primarily an opportunity for engagement and recognition, of which data is only an output. Space can still be created for interviewees to tell their stories, in a respectful environment with active listening.

This may be a space to express sadness, or regret. It may be a space for tears. But it was also clear how joyful and rewarding the act of storytelling can be, and the pride people take in sharing experiences and achievements.

In a café we sat down with Fardosa, a 50-year-old Somali woman from Mogadishu who has been living in Eastleigh since 2017.

In keeping with ethical research practice, we explained the aims of the research project and why we were seeking to document experiences and perspectives of refugees living and working in her neighbourhood. We invited Fardosa to participate in the interview and she gave her consent.

However, consent to participate in an interview does not mean information from that interview can be shared. So we asked Fardosa whether she would be open to us sharing her interview with other researchers, and assured her we would take measures to protect her identity and the information she gave us.

Fardosa’s response took us by surprise: “but I don’t care about people knowing my name, I want you to share my story, I want people to hear this story.”

Ethical protocols around anonymity are put in place to protect refugees, for good reason. A casual attitude to data sharing by humanitarian agencies has led to some refugees facing security threats.

Yet, Fardosa’s challenge put a different spin on ‘sharing’. She was asking us to share her story in full, challenging the research practice of turning stories into bits of shareable data.

The information given by refugees in Eastleigh is often sliced and diced to create ‘profiles’ of refugees living and working there; the answers they give turn into an edited snapshot of their real experience. The sense of the individual is often lost completely - one can easily lose sight of the fact that these are real people.

As our fieldwork encounters revealed, centring stories in research processes – whether in the interview itself or in the way information from the interview is shared after – is important for creating more meaningful ways for refugees to participate in research.

Read more about Fardosa’s story as part of a virtual story exhibit hosted by UNHCR.

With thanks to Fatuma Ahmed and Tewelde Adhanom of Samuel Hall for their contributions to this blog.

Patricia Garcia Amado is a researcher at Cardiff University 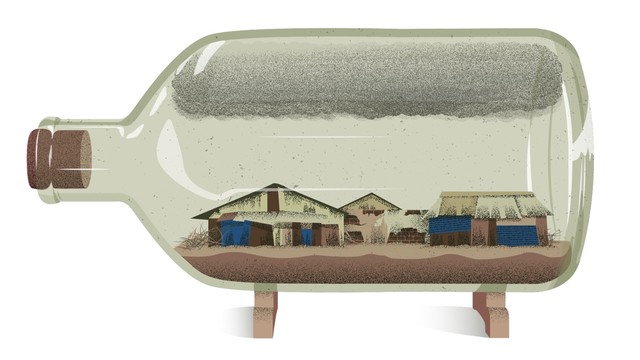