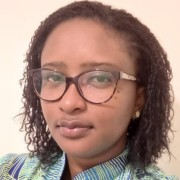 Fatou is an Angolan citizen with seven years of professional experience in climate change and environmental management.

Before joining IIED, Fatou worked for the United Nations Environment Programme, where she coordinated and supported policy development on sustainable mobility (such as the transport sector), for west and central Africa.

From 2017-19, Fatou worked for the African Union Commission, where she supported various sectors including climate change and sustainable environment. Prior to that, she served the Ministry of Culture, Tourism and Environment of the Republic of Angola, first as a climate change policy officer and she was later promoted later to coordinate a Global Environment Facility-funded project on sustainable forest management.

Fatou has been involved in the UNFCCC climate change negotiations under the banner of Angola as a young negotiator, and as a bursary holder of the European Capacity Building Initiative from 2016-17.

Fatou supports the Least Developed Countries (LDC) Group at the United Nations Framework on Climate Change (UNFCCC) negotiations. She is also working on capacity strengthening of LDC delegates on the UNFCCC negotiations processes.