Urban Poor Funds; development by the people for the people 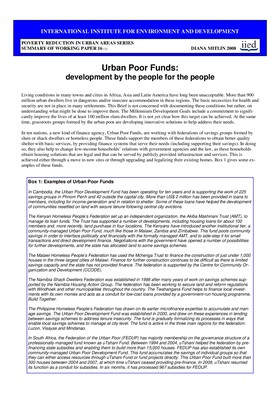 Summary of Working Paper 16 of the Poverty Reduction in Urban Areas series.

Living conditions in many Southern towns and cities have long been unacceptable. Children grow up in squalor, adults live in fear of eviction, piped water supplies are intermittent (if there is piped water at all), sanitation facilities are lacking (and are often simply an unimproved pit latrine), housing investment is inadequate using materials that frequently require replacement, drainage is non-existent resulting in pools of stagnant water, and solid waste is left in dumpsites in close proximity to living spaces. In many cases, these settlements are located some distance from major economic centres with under-serviced and expensive transport routes. However, it is equally common for these settlements to be proximate but segregated; perceived as separate and characterised as dangerous and undesirable. In summary the basic necessities to enable a healthy and secure life are not in place in many settlements; and the residents of these neighbourhoods face discrimination.

The working paper is not concerned with documenting the conditions under which people are living, but rather concentrates on understanding what might be done. The Millennium Development Goals include a commitment to reduce by 100 million those living in “slum” settlements. However, it is not yet clear how this target can be achieved. In many cases, addressing the needs of low-income settlements is perceived as institutionally complex and requiring of multi-faceted interventions (Stevens, Coupe and Mitlin 2006). Despite this, many national governments have invested in a great variety of attempts to improve shelter opportunities with Greenfield development, upgrading and other strategies to support home ownership. The paper briefly outlines some of the major problems and considers the success of these attempts and highlights some reasons to account for their failure to address the problem at scale.