Based on his work during an ambitious slum upgrading programme in the state of Odisha (India), guest blogger Antarin Chakrabarty shows how the lack of relevant or accurate data on climate risk and resilience in slums could be resolved by making community-based data collection the norm

Blog by
Antarin Chakrabarty
Associate fellow and state team lead (Jaga Mission), Centre for Policy Research, India
28 November 2022
Collection
The transition to a predominantly urban world
A series of blogs and interviews exploring what social, political and environmental factors cause cities to thrive or decline

One of the few successes of COP27 was an acknowledgement by high-income nations of the need to address the loss and damage associated with climate change in low- and middle-income nations. But there was no agreement on who and what it could fund, writes David Satterthwaite, who curates this series of blogs.

How will it engage with local governments and civil society? Will it ignore adaptation, and prioritise mitigation? Will it fund measures to prevent loss and damage?

The availability of open-source software and the increasing familiarity of slum communities with digital technologies can be used to paint a true picture of what is needed – and where – in the fight for climate resilience.

Increasingly, large urban development programmes in India are being designed and implemented in a manner which allows them to make grandiose claims of achievement, while simultaneously making it impossible for ordinary citizens and community groups to challenge and independently verify those claims.

This state of affairs is facilitated by the fact that for any development programme to be effective, it has to work at a fairly large scale. I have already written about these programmes – driven by the government in partnership with private sector consultancies. The combination of ‘state-power’ and ‘money-power’ makes it a powerful coalition.

How many toilets? Really?

But the barriers to critiquing these initiatives have serious implications for sustainability and climate action. For example the Swachh Bharat Mission, India’s flagship sanitation programme, which has great relevance to the UN’s Sustainable Development Goal 6, claimed in 2019 that it had constructed more than 110 million toilets for 600 million people in 60 months.

How exactly does anyone verify this? Having worked in large government programmes, I have seen that typically the government itself verifies the claims, irrespective of who ultimately prepares and publishes the study reports.

I have written about the climate resilience potential of Jaga Mission in an earlier blog. I described how the nine infrastructure components, created at such a large scale, have serious potential to contribute to climate resilience, but it is also important to estimate by exactly how much?

And this is precisely where the picture gets blurry. For example, these components include street paving with interlocking concrete blocks (to allow percolation of rainwater), stormwater drainage and the creation of open spaces with groundwater recharge structures. Considering that many of the cities covered under Jaga Mission lie in high cyclone-risk zones, these measures can contribute substantially to making these slums resilient to flooding. But by how much exactly?

The mission officially claims that approximately 73,000 metres of streets were paved and 53,000m of stormwater drains laid in the first phase of upgrading, covering 550 slums. The trouble with these aggregated figures is that it’s very hard to understand what is going on at the slum level.

Good luck to any external agency trying to cover close to 3,000 slums spread across 156,000 square kilometres to check if all the streets have been paved properly, lined with stormwater drains (connected to city-wide drainage networks) and that the rainwater recharge structures are constructed where they’re needed and not right next to ponds!

There are simply too many data points and it is too dynamic a reality to be controlled and quantified by any top-down, centralised, bureaucratic system. The myth of grand, computerised ‘command and control’ centres continuously ingesting data from electronic sensors and generating conveniently-gratifying visualisations of project implementation metrics is exactly that – a myth.

The data they ingest is ultimately collected by hapless municipal workers running from pillar to post, trying to document a scale of implementation which is impossible to cover manually. Such a process is ripe for human errors in data collection and false reporting to please superiors, while citizens are effectively reduced to passive beneficiaries of government schemes.

The processing power of computing is needed at the bottom – where the projects hit the ground – and not at the top where the command and control centres lie.

A possible solution could be to turn the community itself into its own command and control centre. The availability of open-source software and the increasing familiarity of slum residents with digital technologies makes such community-based computing quite possible.

For instance, by combining feedback received from residents regarding flooding with data on terrain and precipitation (easily acquired from publicly-available sources), a good estimate of the impact that specific upgrading interventions are having on climate resilience is possible.

Doing it for themselves

A few months ago, some of my colleagues undertaking a participatory study in a slum discovered that the settlement was prone to waterlogging and flooding – even after upgrading.

The slums had received a signed statement confirming that all the infrastructure components had been constructed. Yet, it was clear from discussions with residents and from visual observations that the problems persisted. 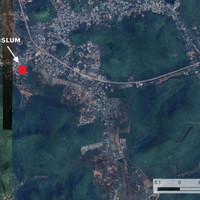 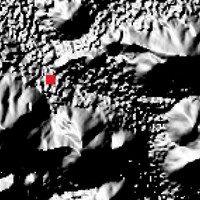 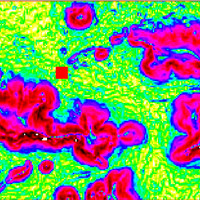 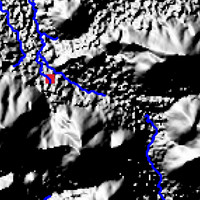 A series of images showing the area around a slum: 1. The location of a slum on Google satellite imagery (Lat 20.63712 N; Long 85.57776 E); 2. A relief map shows the hilly terrain around the slum; 3. Slope analysis shows the percentage slope around the slum; 4: Drainage stream modelling shows streams passing through and near the slum. Click on the images to expand them and scroll through.

To analyse feedback from the community a bit deeper, I overlaid the location of the slum on a terrain elevation map. These digital elevation model maps can be downloaded free from the US Geological Survey’s EarthExplorer or ISRO’s Bhuvan.

It was clear from the elevation map that the slum was surrounded by hills ranging from 230m to 270m in height, with slopes of up to 80%. Even a simple visual analysis suggested that the slum fell in a drainage basin.

A simple algorithm was then run on the open-source GRASS GIS (geographic information system) software to simulate how streams would flow in this terrain in case of rains and flash floods. As can be seen, one stream flows straight through the slum and another passes nearby.

Although this was a quick analysis it showed how a problem could be identified and understood by combining community feedback with the power of computing. Initially this process could involve teaming up community members with open-source volunteers in a Map Kibera-like partnership.

But as we saw in the previous blog, the community could soon catch up and do it for themselves.

I experimented with some basic analysis using smart phones with members of another slum community in the city of Dhenkanal – using a simple game of identifying each other’s homes on a digital map (not all communities have the navigational skills of the Nolia fishing folk).

But they achieved this with ease, so I can readily imagine the same residents carrying out basic terrain analysis and preparing the drainage plans for their own settlement in the near future.

In fact, given the climate challenges facing our cities, they must – or we are dead.

We invited Antarin Chakrabarty to contribute to this blog series and reflect on his experience working in Jaga Mission, the state of Odisha’s ambitious slum upgrading programme. His particular interest is how well this was served – or not served – by GIS.